Linux desktop remains an unpopular choice among mainstream desktop users, making up a little more than 2% of the desktop operating system market share. This is in contrast to the web server market share, which consists of 70% of Linux-based operating systems. Consequently, the Linux malware ecosystem is plagued by financial driven crypto-miners and DDoS botnet tools which mostly target vulnerable servers.

This explains our surprise when in the beginning of July, we discovered a new, fully undetected Linux backdoor implant, containing rarely seen functionalities with regards to Linux malware, targeting desktop users.

Throughout our investigation, we have found evidence that shows operational similarities between this implant and Gamaredon Group. We have investigated this connection and in this blog we will present a technical analysis of the tool.

We have named the implant EvilGnome, for its disguise as a Gnome extension. The malware is currently fully undetected across all major security solutions:

We believe this is a test version that was uploaded to VirusTotal, perhaps by mistake. The implant contains an unfinished keylogger functionality, comments, symbol names and compilation metadata which typically do not appear in production versions. EvilGnome’s functionalities include desktop screenshots, file stealing, allowing capturing audio recording from the user’s microphone and the ability to download and execute further modules.

Gamaredon Group is an alleged Russian threat group. It has been active since at least 2013, and has targeted individuals likely involved with the Ukrainian government. Gamaredon Group infects victims using malicious attachments, delivered via spear phishing techniques. The group’s implants are characterized by the employment of information stealing tools—among them being screenshot and document stealers delivered via a SFX, and made to achieve persistence through a scheduled task. Gamaredon Group primarily makes use of Russian hosting providers in order to distribute its malware.

Our investigation into EvilGnome yielded several similarities between the threat actors behind EvilGnome and Gamaredon Group:

The operators of EvilGnome use a hosting provider that has been used by Gamaredon Group for years, and continues to be used by the group.

More specifically, EvilGnome’s C2 IP address (195.62.52.101) was resolved two months ago by the domains gamework.ddns.net and workan.ddns.net, associated with the Gamaredon Group:

We used RiskIQ to map the history of the gamework.ddns.net domain:

The finding shows that EvilGnome operates on an IP address that was controlled by the Gamaredon group two months ago.

While investigating the EvilGnome C2, we observed that it served SSH over port 3436.

We then checked for the 3436 port over three currently operating Gamaredon Group C2 servers, and found one server with this port open, serving SSH:

We proceeded to scan for this network fingerprint under EvilGnome’s host provider and we identified two additional servers with domain names similar to the naming pattern of Gamaredon domains (the use of the .space TTLD and ddns):

Gamaredon Group does not use any known Linux implants. It is difficult to make comparisons between tools built for different operating systems because they are developed with different challenges and objectives in mind. We can, however, observe similarities at a high-level. The techniques and modules employed by EvilGnome—that is the use of SFX, persistence with task scheduler and the deployment of information stealing tools—remind us of Gamaredon Group’s Windows tools. We present a thorough analysis of EvilGnome in the following section.

This implant is delivered in the form of a self-extracting archive shell script created with makeself:

Interestingly, the tool’s operator did not omit metadata from the generated makeself SFX. The packaging date, development paths and the tool’s filename were all left exposed. We can observe that the sample is very recent, created on Thursday, July 4:

As can be observed in the illustration above, the makeself script is instructed to run ./setup.sh after unpacking.

Using makeself’s options, we are able to instruct the script to unpack itself without executing:

Persistence is achieved by registering gnome-shell-ext.sh to run every minute in crontab.

Analyzing the agent with Intezer Analyze demonstrated to us that the code was never seen before by the system:

This large amount of unique genes located within this file is not a trend we regularly see in Linux files and therefore it seems suspicious.

The Spy Agent was built in C++, using classes with an object oriented structure. The binary was not stripped, which allowed us to read symbols and understand the developer’s intentions.

At launch, the agent forks to run in a new process. The agent then reads the rtp.dat configuration file and loads it directly into memory:

We marked interesting fields within the configuration file:

The first four bytes are a hexadecimal representation of the C2’s IP address:

ShooterKey – unimplemented and unused, most likely an unfinished keylogging module

Each module is run in a separate thread, and access to shared resources (such as the configuration) is safeguarded by mutexes.

The modules encrypt their output and decrypt data from the C2 with RC5 with the key “sdg62_AS.sa$die3”, using a modified version of a Russian open source library https://webhamster.ru/site/page/index/articles/projectcode/157:

On connection failure, or if instructed by the C2, these modules store their output at ~/.cache/gnome-software/gnome-shell-extensions/tmp/:

We will now dive into each of the five modules and their options:

The ShooterPing module processes commands received from the C2:

The other modules run at a constant interval between each run, as defined by one of the configuration parameters. The C2 is able to control this interval via downloading new parameters through ShooterPing.

The ShooterFile module uses a filter list to scan the filesystem, while ignoring specific files and folders as shown in the following illustration: 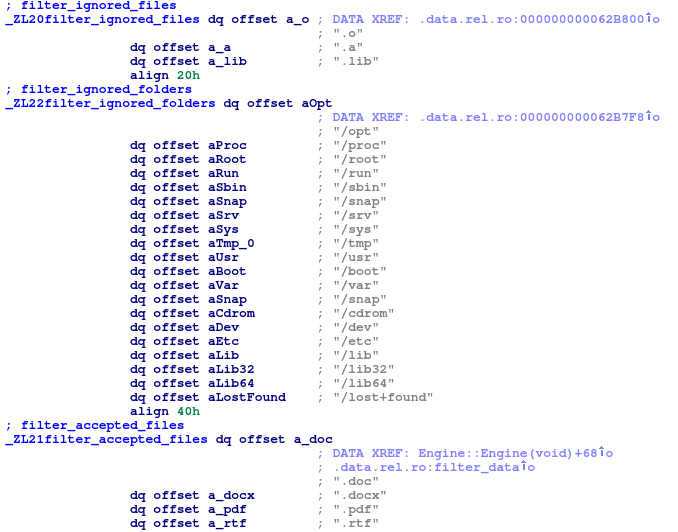 We can see from the filter_accepted_files list that the agent’s purpose is to steal document related files. However, the list is not used by the malware and further indicates that this is a work in progress.

The ShooterAudio module uses PulseAudio to capture audio from the user’s microphone.

Using default configuration from rtp.dat, the module records only a size of 80,000 bytes of audio per iteration. Consequently, the module only records audio for a brief moment, making this module non-functional until a larger recording size is set by the C2.

This module opens a connection to the XOrg Display Server, which is the backend to the Gnome desktop. It uses the Cairo open source library to take screenshots of the user’s desktop.

We recommend to Linux users who want to check whether they are infected to check the “~/.cache/gnome-software/gnome-shell-extensions” directory for the “gnome-shell-ext” executable. We have also created a custom YARA rule, based on code reuse technology, for detecting future variants of EvilGnome.

EvilGnome is a rare type of malware due to its appetite for Linux desktop users. Throughout this post, we have presented detailed infrastructure-related evidence to connect EvilGnome to the actors behind the Gamaredon Group. We believe this is a premature test version. We anticipate newer versions to be discovered and reviewed in the future, which could potentially shed more light into the group’s operations.

The EvilGnome malware variant is now indexed in Intezer’s genetic database. If you have a suspicious file that you suspect to be EvilGnome, you can upload it to Intezer Analyze in order to detect code reuse to this threat family and many others. You are welcome to try it for free in our community edition.