Linux has become the “go-to” OS in cloud computing, running 90% of the public cloud workload. Linux usage has even surpassed Windows on Microsoft Azure, as reported by a Linux kernel developer from Microsoft just a few years ago.

The standard Linux cloud server comes pre-installed with over 2,000 binary files. This encompasses all core OS libraries, including user favorite tools such as bash, grep, sed, and ssh.

Using our novel Genetic Analysis technology, we created an interactive map which allows you to explore the code sharing relationship between all binary files in a standard Azure Ubuntu cloud server. 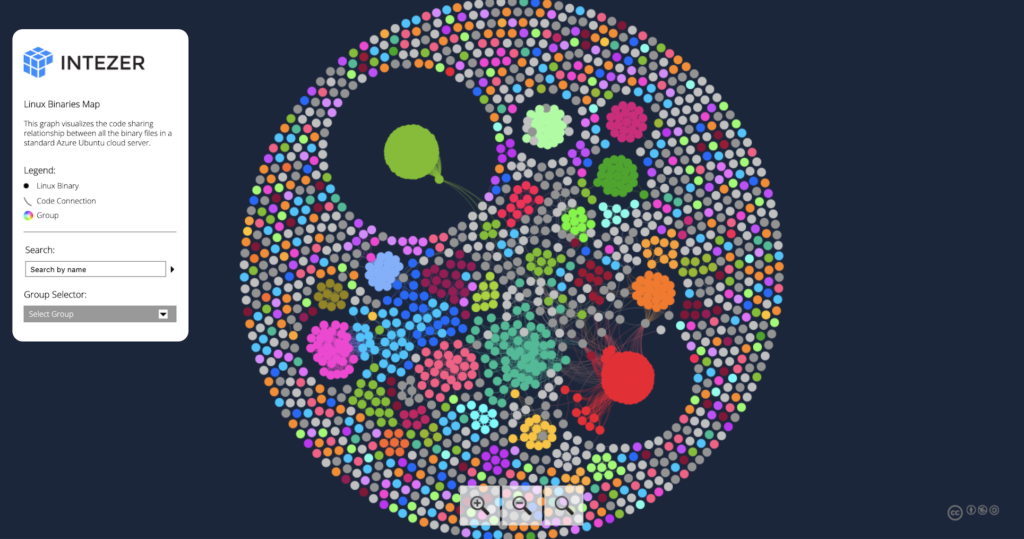 The map contains all of the 2,000+ binaries that come built-in a Microsoft Azure cloud server, in addition to the code reuse connections between them. Both technology and Linux enthusiasts can search for specific binaries, filter by specific software groups, or click on any node (representing a binary file) to see which binaries it shares code with.

Each node has a link to that specific file’s analysis report in Intezer Analyze, which displays more information about the file’s genetic makeup, including code, strings, and other metadata.

The source code, along with a Gephi version of the map, is available at github.com/intezer/Linux-binaries-map.

Having visibility in runtime is the key to detecting and responding to most cyber attacks in cloud servers. Our core technology provides code level visibility to help our customers identify the origins of all applications running in their environments.

Want code-level visibility inside your own cloud workloads? Check out our Cloud Workload Protection Platform (CWPP) which defends against unauthorized code and ensures that all applications running on your workloads are solely from trusted origins. Request a free online trial