What is a Cloud Workload Protection Platform (CWPP)? And Why Do You Need It?

The cloud has completely transformed the IT landscape over the last few years. And... Read more

Cobalt Strike is a popular red team tool for Windows which is also heavily used by threat actors. At the time of this writing, there is no official Cobalt Strike version for Linux.

In August 2021, we at Intezer discovered a fully undetected ELF implementation of Cobalt Strike’s beacon, which we named Vermilion Strike. The stealthy sample uses Cobalt Strike’s Command and Control (C2) protocol when communicating to the C2 server and has Remote Access capabilities such as uploading files, running shell commands and writing to files. The malware is fully undetected in VirusTotal at the time of this writing and was uploaded from Malaysia.

Based on telemetry with collaboration from our partners at McAfee Enterprise ATR, this Linux threat has been active in the wild since August targeting telecom companies, government agencies, IT companies, financial institutions and advisory companies around the world. Targeting has been limited in scope, suggesting that this malware is used in specific attacks rather than mass spreading.

After further analysis, we found Windows samples that use the same C2. The samples are re-implementations of Cobalt Strike Beacon. The Windows and ELF samples share the same functionalities.

The sophistication of this threat, its intent to conduct espionage, and the fact that the code hasn’t been seen before in other attacks, together with the fact that it targets specific entities in the wild, leads us to believe that this threat was developed by a skilled threat actor.

In this post we will provide a technical analysis of the samples and explain how you can detect and respond to this threat.

The file was uploaded to VirusTotal from Malaysia and has no detections in VirusTotal at the time of this writing. 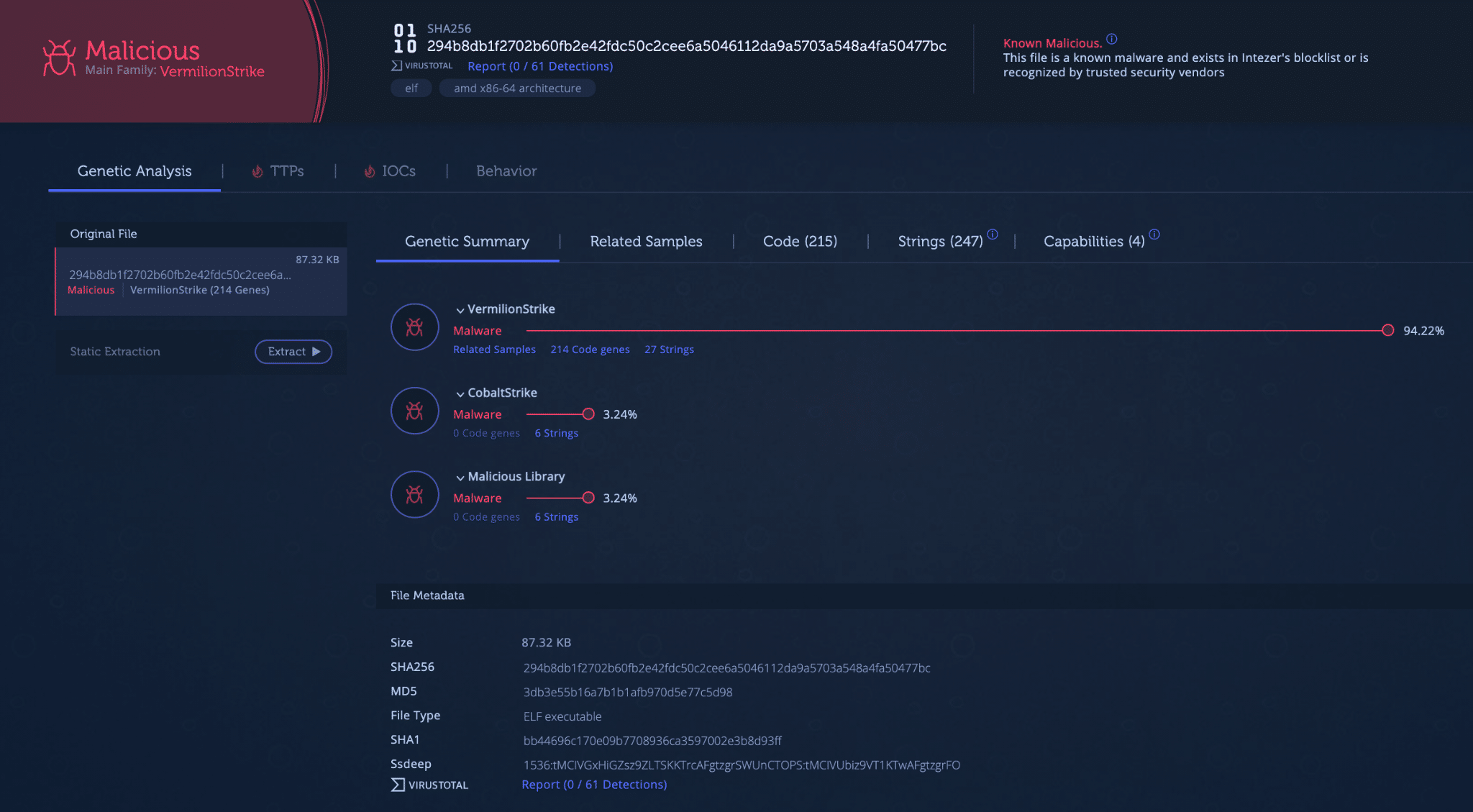 Decoded configuration of the beacon.

Further decryption is performed in a heap with decoded strings, keys, and values required by the beacon for its operation. The beacon will then generate a SHA256 hash sourced from a random number seeded from the thread ID. This value will be used later in DNS beaconing. Next, a public RSA key will be imported for later use.

The beacon will begin fingerprinting the machine. A random number will be generated and the process ID will be fetched. It will grab the kernel version of the machine using uname. Next, the beacon will fingerprint network information through the getifaddrs function. It will loop through the interfaces looking for IPv4 addresses. It will gather the interface with an address not equal to “127.0.0.1” and stage the IPv4 address.

Next, the beacon will fingerprint the entry in the local password database for information about the current effective user ID of the process.

The beacon will then fingerprint the hostname of the machine. The collected information will be formatted into a string, encrypted with the public RSA key, and base64 encoded, as is standard for communication with a Cobalt Strike server. The stages are shown below.

Stages of formatting the machine fingerprint.

Prepended to the fingerprint string is the value “1.0.1.LR”. This appears to be an internal version string. A similar string, “W1.0.1,” was found in a newly discovered Windows sample of Vermilion Strike that shares the same C2 and malware functionality.

Command and Control is primarily performed over DNS but also available over HTTP. This DNS-based approach for communications can help avoid traditional defenses that monitor HTTP traffic. Commands are received via DNS Address (A) and Text (TXT) records. The beacon first makes DNS requests out to hardcoded subdomains and gets an IP address returned. Normally, DNS requests on hostnames are intended to be translated into an IP address for which to visit. In this case, the IP address returned is not used as an IP address but for triggers to change the beacon behavior.

Once the beacon gets the signal to download a task, it will perform a DNS TXT query to the domain’s nameservers, as shown below.

The result of the TXT query is a base64 encoded and AES encrypted struct containing task information. An example of a returned task is shown below.

A DNS TXT query result for a task.

A decrypted task is shown below.

Tasks that the beacon can perform are:

The malware uses a separate thread to execute the tasks. The tasks are scheduled as jobs via a semaphore to ensure not too many jobs are executed at once. Vermilion Strike has a third way of communicating with the C2 server via ICMP ping messages. The malware adds the current pid to the offset 0x4 in the header and the encrypted payload is sent as data in the ICMP packet. The data size for an ICMP packet is limited to 65,507 bytes but the malware uses a size limit of 64,000 bytes for the payload. The code for sending and processing ICMP messages exists in the malware but the code for enabling it via the configuration is not present. This means it has the capability but can’t be configured to use it. This suggests it may be a new feature that hasn’t been fully developed yet.

An example of the next stage DLL is 7129434afc1fec276525acfeee5bb08923ccd9b32269638a54c7b452f5493492. This sample, first noticed in 2019 by Silas Cutler, is the Windows DLL equivalent of the ELF file. The functionality is almost exactly the same, except for the Windows environment. A side-by-side comparison of the configuration decoding function for the ELF and DLL beacons is shown below.

The DLL has the same domains as the ELF for C2, as well as an additional configured domain “amazon.hksupd[.]com”.

Vermilion Strike and other Linux threats remain a constant threat. The predominance of Linux servers in the cloud and its continued rise invites APTs to modify their toolsets in order to navigate the existing environment. Linux threats often have low detection rates compared to their Windows counterparts due to reasons discussed in Why we Should be Paying More Attention to Linux Threats.

Intezer Analyze can detect both Linux and Windows variants of Vermilion Strike, based on code reuse, TTPs, and strings. Shown below are the verdicts for both versions.

Get full runtime visibility over your code

For Linux-based systems, use Intezer Protect to get alerted on any malicious or unauthorized code executed in runtime. Protect 10 hosts, nodes or machines for free

For Windows-based systems, use the Intezer Analyze Endpoint Scanner to scan the entire memory of your machines to find any traces of malicious code running on them.

We also recommend using the IoCs section below to ensure that the Vermilion Strike process does not exist anywhere on your system.

If you are a victim of this operation, take the following steps:


Intezer would like to thank McAfee ATR for their help during the research process.

Dr. Joakim Kennedy is a Security Researcher at Intezer. His job involves analyzing malware and tracking threat actors. He has been a featured speaker at multiple BSides and other industry events. Prior to joining Intezer Joakim managed Anomali's Threat Research Team.