Iron Cybercrime Group Under The Scope

GitLab servers are under attack with a now-patched critical vulnerability Earlier this week we investigated... Read more

In April 2018, while monitoring public data feeds, we noticed an interesting and previously unknown backdoor using HackingTeam’s leaked RCS source code. We discovered that this backdoor was developed by the Iron cybercrime group, the same group behind the Iron ransomware (rip-off Maktub ransomware recently discovered by Bart Parys), which we believe has been active for the past 18 months.

During the past year and a half, the Iron group has developed multiple types of malware (backdoors, crypto-miners, and ransomware) for Windows, Linux and Android platforms. They have used their malware to successfully infect, at least, a few thousand victims.

In this technical blog post we are going to take a look at the malware samples found during the research.

** This installer sample (and in general most of the samples found) is protected with VMProtect then compressed using UPX.

1. Check if the binary is executed on a VM, if so – ExitProcess

Once we Analyzed the backdoor sample, we immediately noticed it’s partially based on HackingTeam’s source code for their Remote Control System hacking tool, which leaked about 3 years ago. Further analysis showed that the Iron cybercrime group used two main functions from HackingTeam’s source in both IronStealer and Iron ransomware. 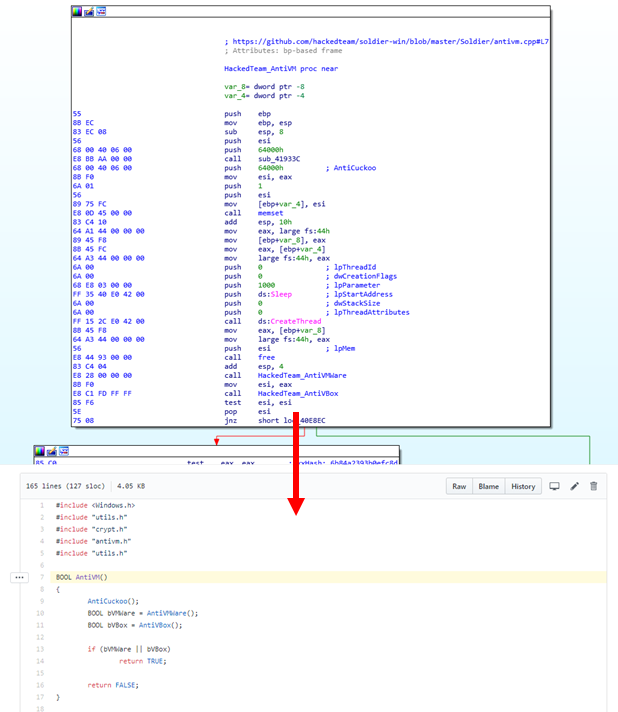 2. Dynamic Function Calls: Iron Backdoor is also using the DynamicCall module from HackingTeam’s “core” library. This module is used to dynamically call external library function by obfuscated the function name, which makes static analysis of this malware more complex.
In the following screenshot you can see obfuscated “LFSOFM43/EMM” and “DsfbufGjmfNbqqjohB”, which represents “kernel32.dll” and “CreateFileMappingA” API.

For a full list of obfuscated APIs you can visit obfuscated_calls.h.

A patched version of the popular Adblock Plus chrome extension is used to inject both the in-browser crypto-mining module (based on CryptoNoter) and the in-browser payment hijacking module.

The malicious extension is not only loaded once the user opens the browser, but also constantly runs in the background, acting as a stealth host based crypto-miner. The malware sets up a scheduled task that checks if chrome is already running, every minute, if it isn’t, it will “silent-launch” it as you can see in the following screenshot:

Iron Backdoor itself embeds adblockplusie – Adblock Plus for IE, which is modified in a similar way to the malicious chrome extension, injecting remote javascript. It seems that this functionality is no longer automatically used for some unknown reason.

Before installing itself as a Windows service, the malware checks for the presence of either 360 Safe Guard or 360 Internet Security by reading following registry keys:

If one of these products is installed, the malware will only run once without persistence. Otherwise, the malware will proceed to installing rouge, hardcoded root CA certificate on the victim’s workstation. This fake root CA supposedly signed the malware’s binaries, which will make them look legitimate.

Comic break: The certificate is protected by the password ‘caonima123’, which means “f*ck your mom” in Mandarin. 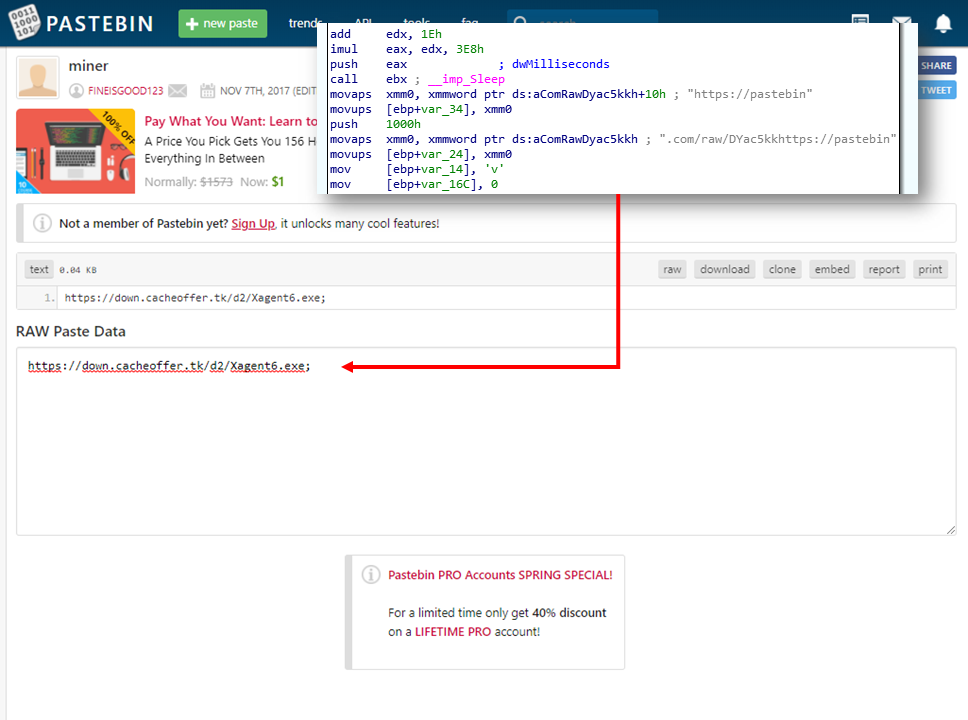 We observed two different payloads dropped by the malware:

1. Xagent – A variant of “JbossMiner Mining Worm” – a worm written in Python and compiled using PyInstaller for both Windows and Linux platforms. JbossMiner is using known database vulnerabilities to spread. “Xagent” is the original filename Xagent<VER>.exe whereas <VER> seems to be the version of the worm. The last version observed was version 6 (Xagent6.exe). 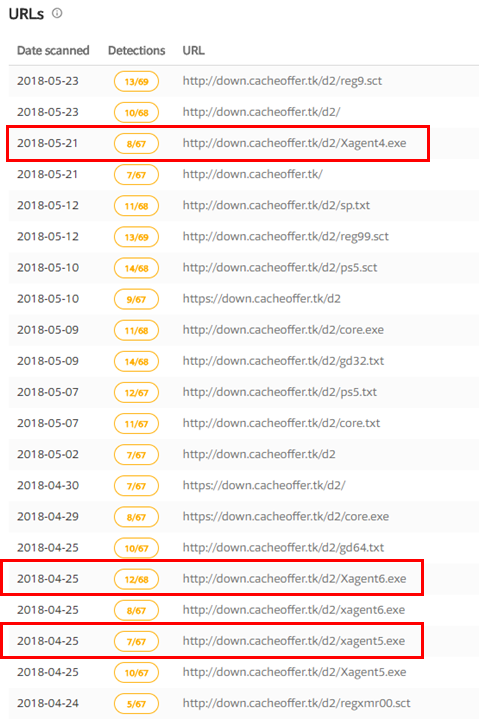 2. Iron ransomware – We recently saw a shift from dropping Xagent to dropping Iron ransomware. It seems that the wallet & payment portal addresses are identical to the ones that Bart observed. Requested ransom decreased from 0.2 BTC to 0.05 BTC, most likely due to the lack of payment they received. 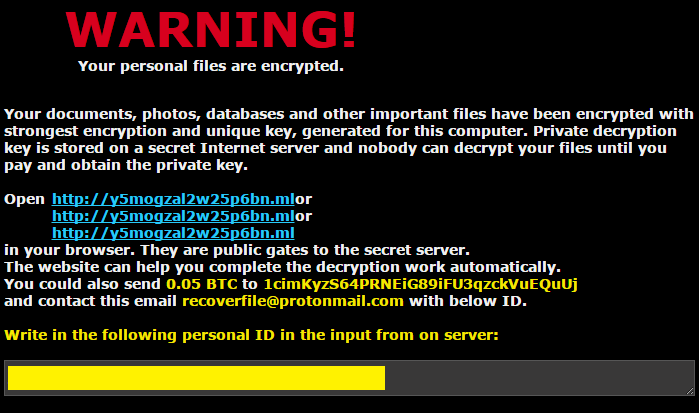 **Nobody paid so they decreased ransom to 0.05 BTC

3. Stealing cryptocurrency from the victim’s workstation: Iron backdoor would drop the latest voidtool Everything search utility and actually silent install it on the victim’s workstation using msiexec. After installation was completed, Iron Backdoor uses Everything in order to find files that are likely to contain cryptocurrency wallets, by filename patterns in both English and Chinese.

4. Hijack on-going payments in cryptocurrency: IronStealer constantly monitors the user’s clipboard for Bitcoin, Monero & Ethereum wallet address regex patterns. Once matched, it will automatically replace it with the attacker’s wallet address so the victim would unknowingly transfer money to the attacker’s account: 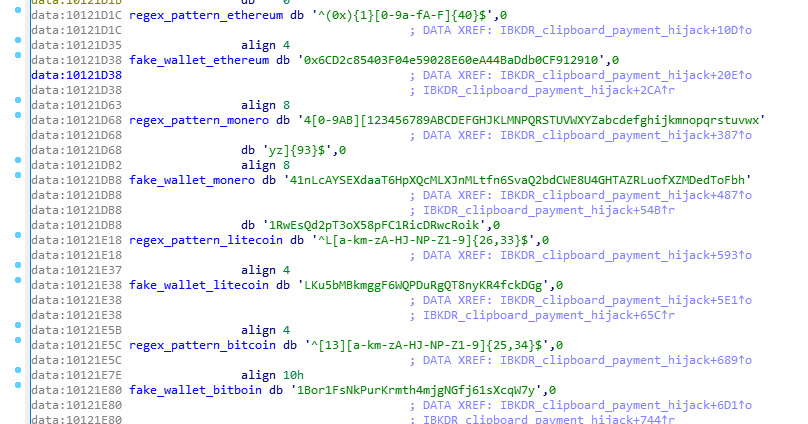 As part of the investigation, we also tried to figure out what additional information we may learn from the attacker’s Pastebin account: 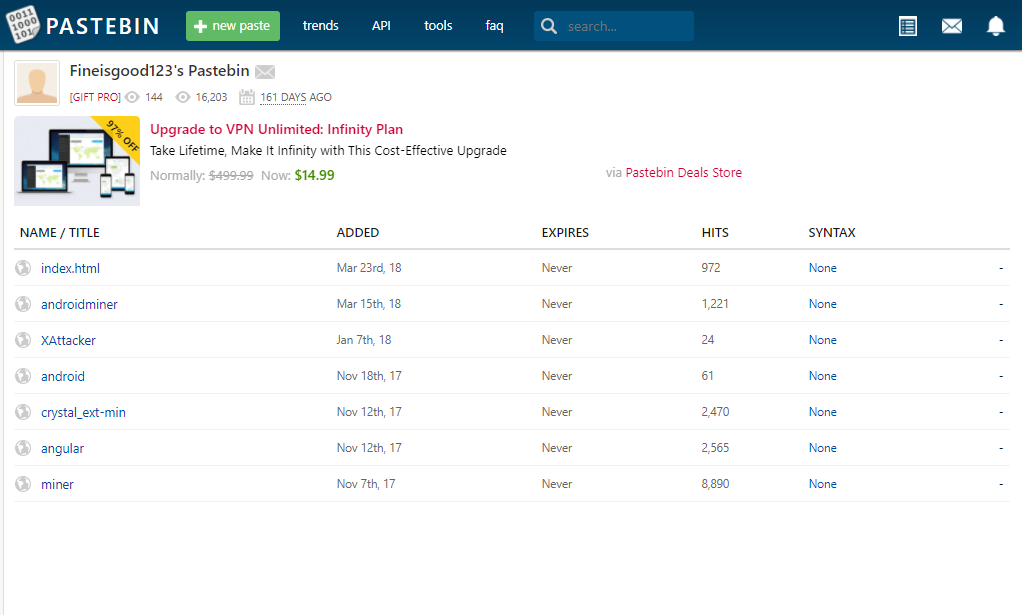 4. androidminer: Holds the cpuminer command line to execute for unknown malicious android applications, at the time of writing this post, this paste received nearly 2000 hits. 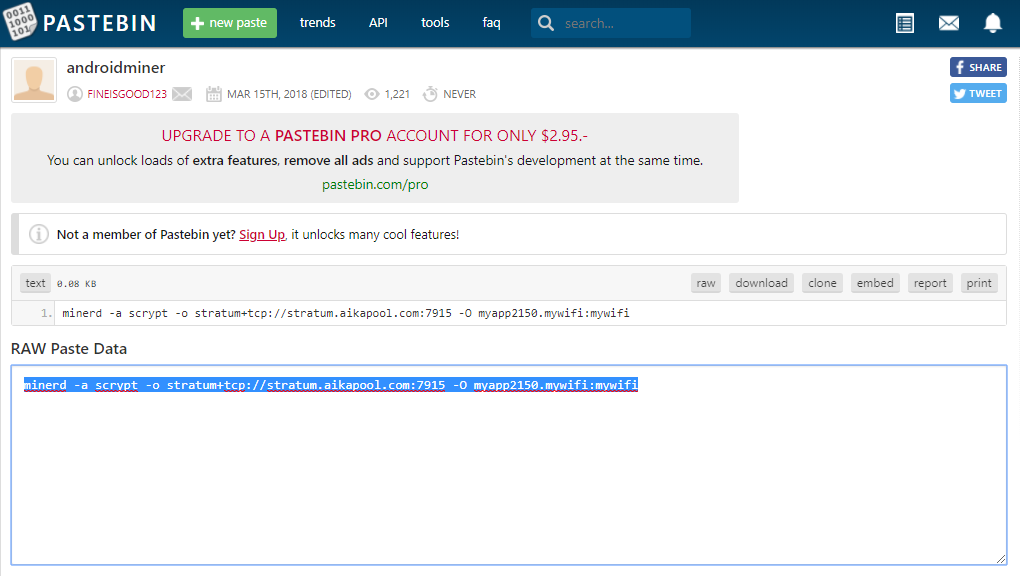 Aikapool[.]com is a public mining pool and port 7915 is used for DogeCoin:

The username (myapp2150) was used to register accounts in several forums and on Reddit. These accounts were used to advertise fake “blockchain exploit tool”, which infects the victim’s machine with Cobalt Strike, using a similar VBScript to the one found by Malwrologist (ps5.sct).

How many victims are there?
It is hard to define for sure, , but to our knowledge, the total of the attacker’s pastes received around 14K views, ~11K for dropped payload URL and ~2k for the android miner paste. Based on that, we estimate that the group has successfully infected, a few thousands victims.
Who is Iron group?
We suspect that the person or persons behind the group are Chinese, due in part to the following findings:
. There were several leftover comments in the plugin in Chinese.
. Root CA Certificate password (‘f*ck your mom123’ was in Mandarin)
We also suspect most of the victims are located in China, because of the following findings:
. Searches for wallet file names in Chinese on victims’ workstations.
. Won’t install persistence if Qhioo360(popular Chinese AV) is found