Sigma rules are catching on more and more for SOC teams, as a way to... Read more

Kubernetes (K8s) is revolutionizing the cloud computing environment, having become the most popular platform for container orchestration. It is also one of the most popular repositories on GitHub, with over 100,000 commits and over 3,000 contributors. Each year there is a steady increase in enterprises using Kubernetes and the number of clusters they deploy. According to the Cloud Native Computing Foundation (CNCF) 2020 survey, 91% of respondents are using Kubernetes, compared to 78% in 2019 and 58% in 2018. In the same survey, it was reported that among the top challenges of using and deploying containers were complexity, security and lack of training.

With these challenges that enterprises face using containers and K8s clusters, there has never been a greater opportunity for attackers to exploit weaknesses in security. Applications such as “Argo Workflows” orchestrate parallel jobs in Kubernetes by providing a friendly user interface and the ability to run CI/CD pipelines without having to configure “complex software development products.” The application is marketed to “Easily run compute intensive jobs for machine learning or data processing in a fraction of the time using Argo Workflows on Kubernetes.” Even with products like Argo helping to reduce the complexity of deployment, there is still always the possibility of misconfiguration or exploitation.

Recently, while studying the impact of exposed Argo Workflows instances, we discovered a number of unprotected instances, operated by companies in several industries including technology, finance and logistics. Exposed instances can contain sensitive information such as code, credentials and private container image names. We also discovered that in many instances, permissions are configured which allow any visiting user to deploy workflows. We also detected that some misconfigured nodes are being targeted by threat actors. An example of an attack found in the wild, launching a popular cryptocurrency miner container, is described later in this blog.

The core resource in Argo is the “Workflow.” The workflow is defined using a YAML file containing a “spec” for the type of work to be performed. Most commonly, each step in an Argo workflow is a container. An example “Hello World” workflow is shown below:

These workflows are executed from a template or submitted directly through the Argo user interface, as shown below:

How Argo is Abused by Attackers

In instances when permissions are misconfigured, it is possible for an attacker to access an open Argo dashboard and submit their own workflow. In one cluster, we noticed that a popular cryptocurrency mining container, kannix/monero-miner, was being deployed. An example of an in the wild attack, still running on an exposed cluster for nine months, is shown below.

The “kannix/monero-miner” (now removed from Docker Hub) was a popular image which used XMRig to mine for Monero cryptocurrency. Its ease of use allowed it to be conveniently used by threat actors of any skill level to conduct cryptojacking; since all that was required was to change the address of who the mined cryptocurrency would be deposited to. This same container was mentioned in a blog post by Azure Security Center, which stated that this container was used in a large-scale cryptocurrency mining attack against Kubernetes clusters.

In Docker Hub there are still a number of options for Monero mining that attackers can use. With a simple search it shows that there are at least 45 other containers with millions of downloads.

An example of what an attack looks like in a cluster defended by Intezer Protect is shown below. Using another popular container, “giansalex/monero-miner,” Intezer Protect detects and alerts on an XMRig Miner running on the cluster via Argo Workflows.

For a quick check that an instance is misconfigured, try accessing the Argo Workflows dashboard from an unauthenticated incognito browser outside your corporate environment. Another option is to query the API of your instance and check the status code. Make a HTTP GET request to [your.instance:port]/api/v1/info. A returned HTTP status code of “401 Unauthorized” while being an unauthenticated user will indicate a correctly configured instance, whereas a successful status code of “200 Success” could indicate that an unauthorized user is able to access the instance.

It is critical to ensure that best practices for permissions are followed in order to prevent unauthorized activity in your environments. Methodologies such as the principle of least privilege (PoLP) should be followed and always refer to the application documentation for best practices on security.

Even if your cluster is deployed on a managed cloud Kubernetes service such as Amazon Web Services (AWS), EKS or Azure Kubernetes Service (AKS), the shared responsibility model still states that the cloud customer, not the cloud provider, is responsible for taking care of all necessary security configurations for the applications they deploy.

If you suspect that your Argo instance has been misconfigured and exposed to the internet with excessive permissions, check for any suspicious activity in the logs and in the workflow timeline. Make sure that there are no workflows that have been running for an excessive amount of time. This might be an indicator of a cryptominer running on your cluster. You can also check out our article on best practices for securing your Kubernetes environment.

It is impossible to completely remove all vulnerabilities or misconfigurations in cloud applications deployed by any entity. New attack vectors, vulnerabilities and misconfigurations are being detected and exploited all the time. Therefore, it is important to have a safety net that can always ensure that only trusted code is running in your environment. In the event that an attacker has exploited a misconfiguration or vulnerability in your K8s cluster or applications running on clusters, runtime protection solutions like Intezer Protect give immediate visibility over all code running on your pods, nodes, and clusters, and help you detect and respond to attacks in your environment. Intezer Protect can also help reduce your attack surface by providing notifications for misconfigurations and offering suggestions on how to remediate.

As you can see in the alert below, Intezer Protect helps security teams directly identify the location and size of the infection. Intezer Protect shows the container, container image, pod and the K8s namespace, allowing a member of the SOC or incident response team to isolate and terminate the running threat. Try Intezer Protect for free on 10 hosts or node clusters to get runtime forensic capabilities built for containers. 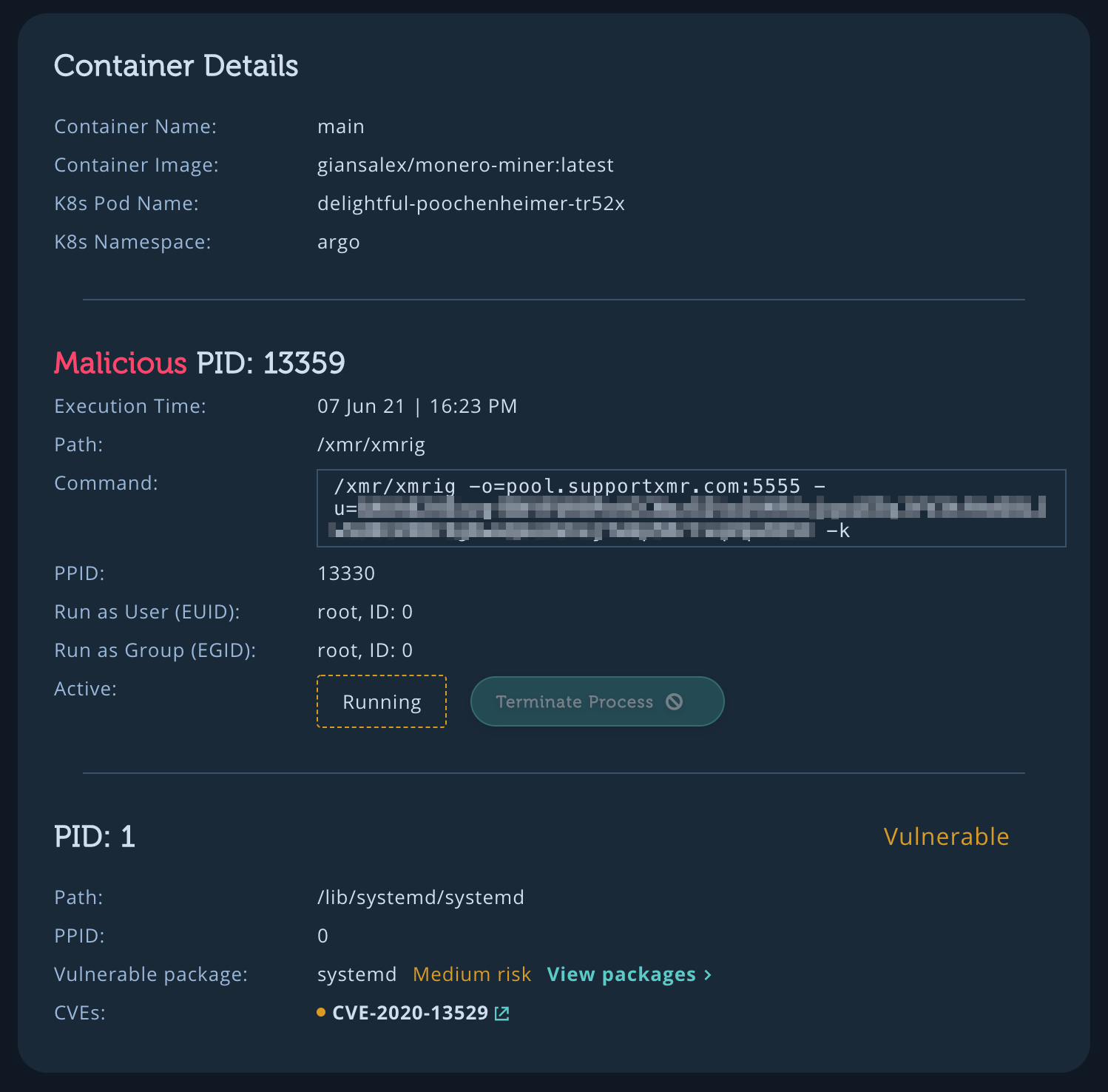