This is a new post in our Executable and Linkable Format (ELF) 101 series, where... Read more

In our previous post, we focused on understanding the relationship between sections and segments, which serve as the foundation for understanding the ELF file format. However, we will soon discover that we have ignored some degree of detail for the sake of simplicity.

In the next couple of posts, we will focus on explaining the details behind Symbols and Relocations, which play a fundamental role in understanding the ELF file format in greater depth.

In the development process of a program, we often use names to refer toa objects in our code, such as functions or variables that are used all throughout the program. This information is what is known as the program’s symbolic information. Symbolic references in machine code get translated into offsets and addresses on the compilation process.

A wide range of tools interact with symbols to enforce their functionality. One example of these tools are Linkers. Linkers usually interact with a Symbol Table in order to match/reference/modify a given symbol inside an ELF object at linktime. Without Symbols, Linkers would not work, since they won’t know which relocations must take place, and therefore would not have a mechanism to match a given symbolic reference to its corresponding value.

Another example of tools that heavily depend on symbolic information are Debuggers. Without Symbols, the process of Debugging can become considerably harder or even worthless, especially for projects with massive code bases such as the Linux Kernel. Debugging without symbols implies that one has no ability to identify functions or variables by name among other impediments. This would considerably reduce the features afforded by debuggers.

Interestingly, Malware also interacts with symbol tables as an anti-analysis mechanism. Symbol Tables can appear to be completely removed from the binary as an attempt to harden the analysis process, or in other cases their String Table entries may be swapped so that symbols will be miss-interpreted. (We’ll cover malware anti-analysis techniques in coming posts.)

In the ELF file format, each Symbol is represented as an instance of an Elfxx_Sym structure inside a given Symbol Table. 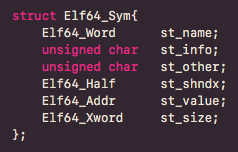 The Elements of this structure include:

The most common symbol types are the following:

In order to retrieve these fields, a set of bitmasks are used. These bitmasks include:

The only relevant contents of this field are its three last significant bits. Other bit fields do not contain specific meaning. In order to retrieve visibility information, the following macro is used:

A single ELF object may contain a maximum of two Symbol Tables. These are .symtab and .dynsym. The difference between these two instances involves the number and type of symbols they contain. We refer .symtab as the binary’s global Symbol Table, containing all symbol references in the current object. The section .strtab is the String Table of .symtab Symbol Table. String Tables store null-terminated strings used to reference objects from a different section. Each String Table contains the exact number of entries as its corresponding Symbol Table. This entails that each string entry at a given index in .strtab corresponds to an Elfxx_Sym entry at the same index in .symtab.

On the other hand, we have .dynsym Symbol Table. This Symbol Table only holds symbols needed for Dynamic Linking. (We’ll cover Dynamic Linking extensively in future posts.) As an overview, when developing an application, sometimes we’d want to use symbols that don’t reside within the context of our program but are instead defined in external objects such as libraries (Shared Objects). Dynamic Linking is the process where the linker tries to dynamically bind those external symbols at runtime in order for them to be referenced safely within the context of a program.

As with .symtab, .dynsym has its own string table called .dynstr. All the relationships previously covered between .symtab and .strtab also apply between .dynsym and .dynstr. The following diagram illustrates the concepts of Symbols and String tables that we’ve just discussed: 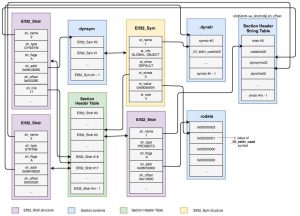 In this diagram, we see an example representation of various data structures from a binary containing the symbol _IO_stdin_used. This symbol is represented as the second Elf32_Sym instance in .dynsym Symbol Table. Note that .dynsym is a section represented as an Elf32_Shdr structure, and the index of its String Table within the Section Header Table can be retrieved by its Elf32_Shdr’s sh_link field.

Furthermore, we can obtain _IO_stdin_used‘s attributes based on its Elf32_Sym instance. We can see that it is of type OBJECT, and its binding is of type GLOBAL. Therefore, we can assume this symbol is a Global variable. Note that the st_value field may lead to misconceptions since it contains a virtual address denoting the symbol’s location within its correspondent section, but not the actual value of the Symbol.

We’ve covered the intricacies of Symbol handling within the ELF file format. We now have an understanding of what symbols are and their different uses. We have also covered the different types of Symbol Tables and how they correlate to different String Tables. In the next post, we will dive into Relocations and the Dynamic Linking process.