Intezer - Klingon RAT Holding on for Dear Life
Analyze and classify 50 suspicious files per month for free. Get Started

With more malware written in Golang than ever before, the threat from Go-based Remote Access Trojans (RATs) has never been higher. Not only has the number of Go malware increased but also the sophistication of these threats.

This is a technical analysis of an advanced RAT written in Go that we are calling Klingon RAT. The RAT is well-featured and resilient due to its multiple methods of persistence and privilege escalation. It was determined that the RAT is being used by cybercriminals for financial gain. It is important to stay on top of this threat as it will degrade Antivirus security through killing targeted processes and hiding communications through encrypted channels.

When searching our various hunting platforms for malware one particular sample caught our eye. This Go sample, active since at least 2019, was flagged as malicious but mostly unique code by our platform.

It is not common to find RATs with very few code reuse. Threat actors reuse code all the time to expedite malware development. Since it is rare to see a RAT with such a large amount of code written from scratch, we dug deeper down the gopher hole. This RAT is full of tactics to combat Antiviruses, maintain persistence and escalate privileges. It communicates encrypted with its Command and Control (C2) server using TLS and can receive commands allowing the attacker to fully control the infected machine.

The malware starts by creating an object whose purpose is to store information about the victim machine, controller setup and paths to dropped utilities.

To start gathering the information on the victim machine, it will get the OS version using the ver command, then grab the username. A GET request is made to https://api.ipify.org to get the public IP address. Finally in this function, it will fetch the machine ID from the registry key HKEY_LOCAL_MACHINE\SOFTWARE\Microsoft\Cryptography\ as shown in Figure 2. This ID will later be sent in a beacon to the Command and Control (C2) server. 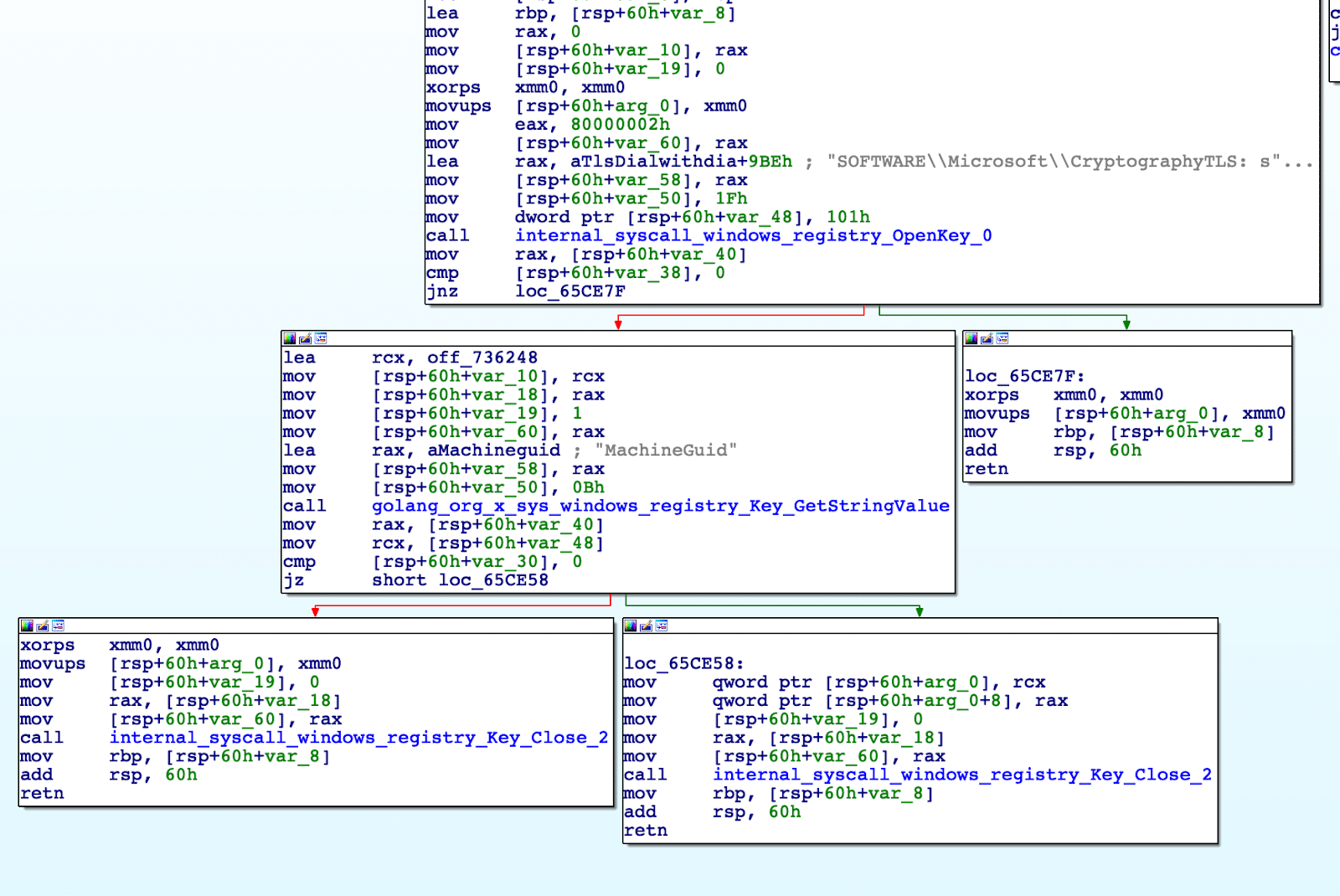 Figure 2: Function that fetches the key

The malware will decompress and drop three Gzip embedded files into the %temp% directory. The dropped files are utilities for the threat actor to use once a C2 channel has been established. The files dropped are Foxmail, PAExec and LSASS, shown below. 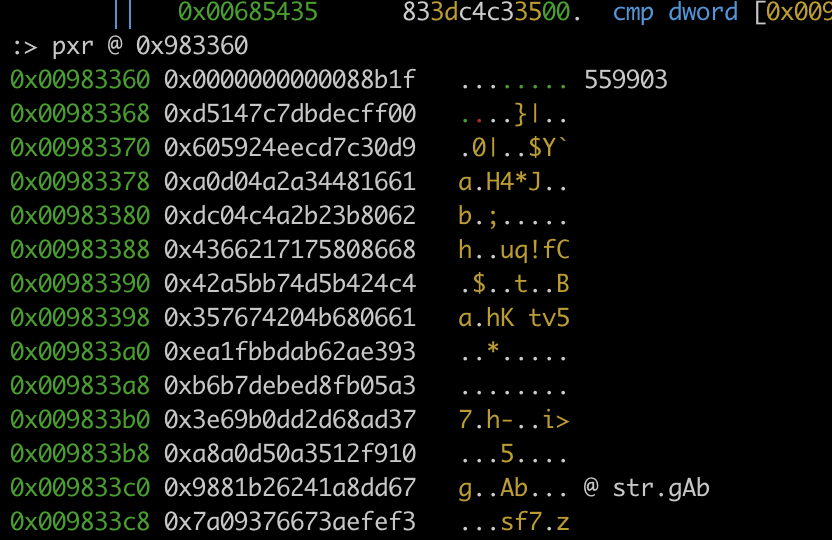 Persistence can be set up in multiple ways, some of which require admin privileges. Privilege escalation will be covered in a later section.

The following registry entry is created:

A similar entry as the above is created at:

Image File Execution Options are configured by the Windows registry with the intention of being used for debugging. This can be leveraged for persistence as any executable can be used as a “debugger.” The malware ensures the following keys exist:

This causes the binary for Microsoft Screen Magnifier (magnify.exe) accessibility tool to be backdoored and execute the malware.

In this option the malware utilizes “WMIC” to create an event subscription for persistence. Three commands are executed to create events in the “\rootsubscription” namespace that will start the payload within 60 seconds of Windows booting up. The commands executed are:

The malware can modify the “Winlogon” key in order to run itself during Windows logon. The path of the executable is appended to the “Userinit” entry. 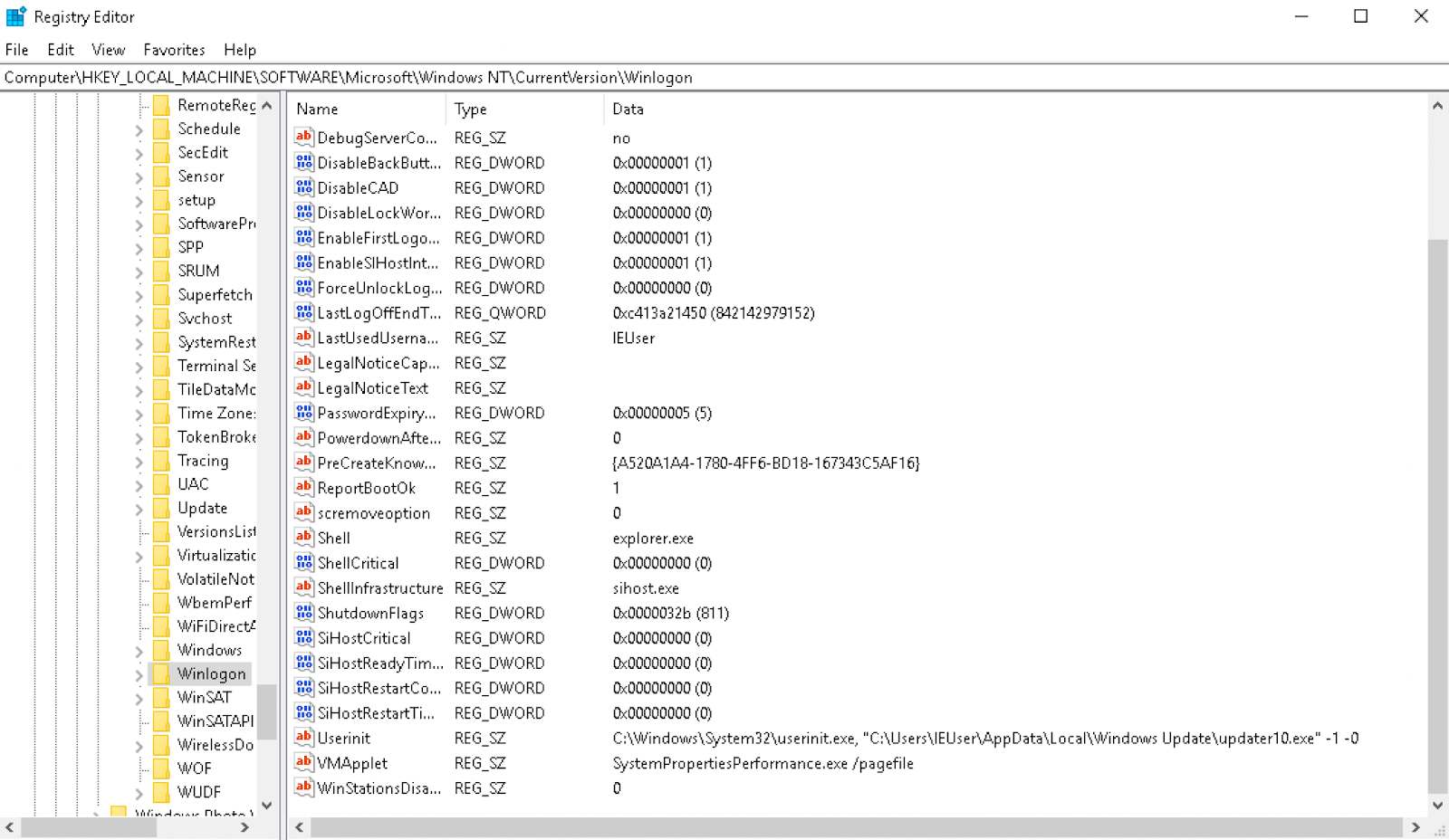 The malware can create a scheduled task called “OneDriveUpdate” to maintain persistence. The task is configured from an XML file, “elevator.xml” dropped to APPDATA, to trigger upon logon. 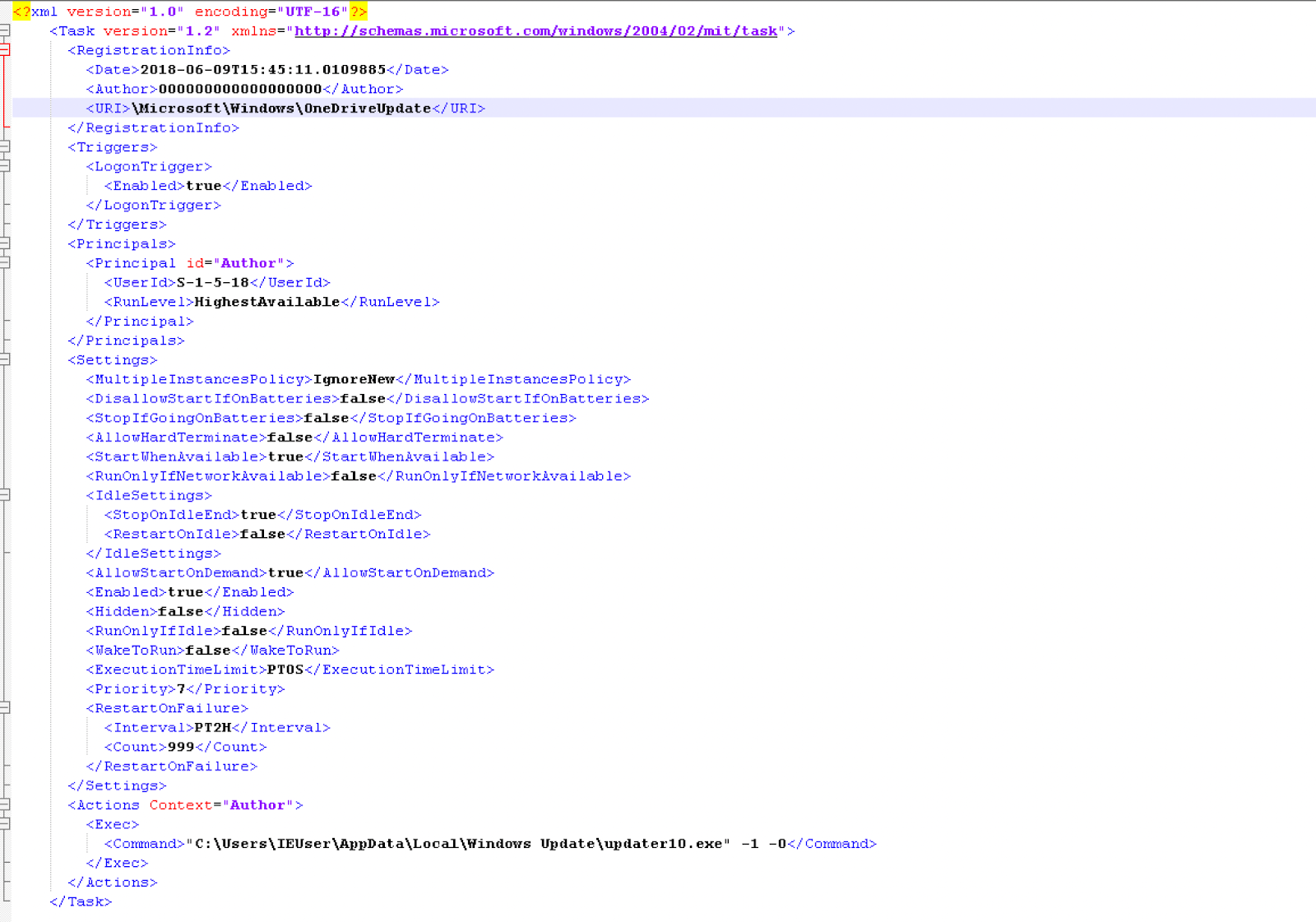 Figure 8: Action of triggering the task

The file “elevator.xml” is then removed from the disk.

There are multiple avenues that the malware can take for privilege escalation. It will first test to see if it already has admin privileges and if it is a Windows server. To check if the process has admin privileges, it will attempt to open “\\\\.\\PHYSICALDRIVE0;” if unsuccessful, the malware will attempt to open “\\\\.\\SCSI0.” If successful for either of these, it will return “True” from the function. If “False,” the program will check to see if it is a Windows server by running the command “systeminfo,” and parsing for the string “Microsoft Windows Server,” as shown in Figure 9. 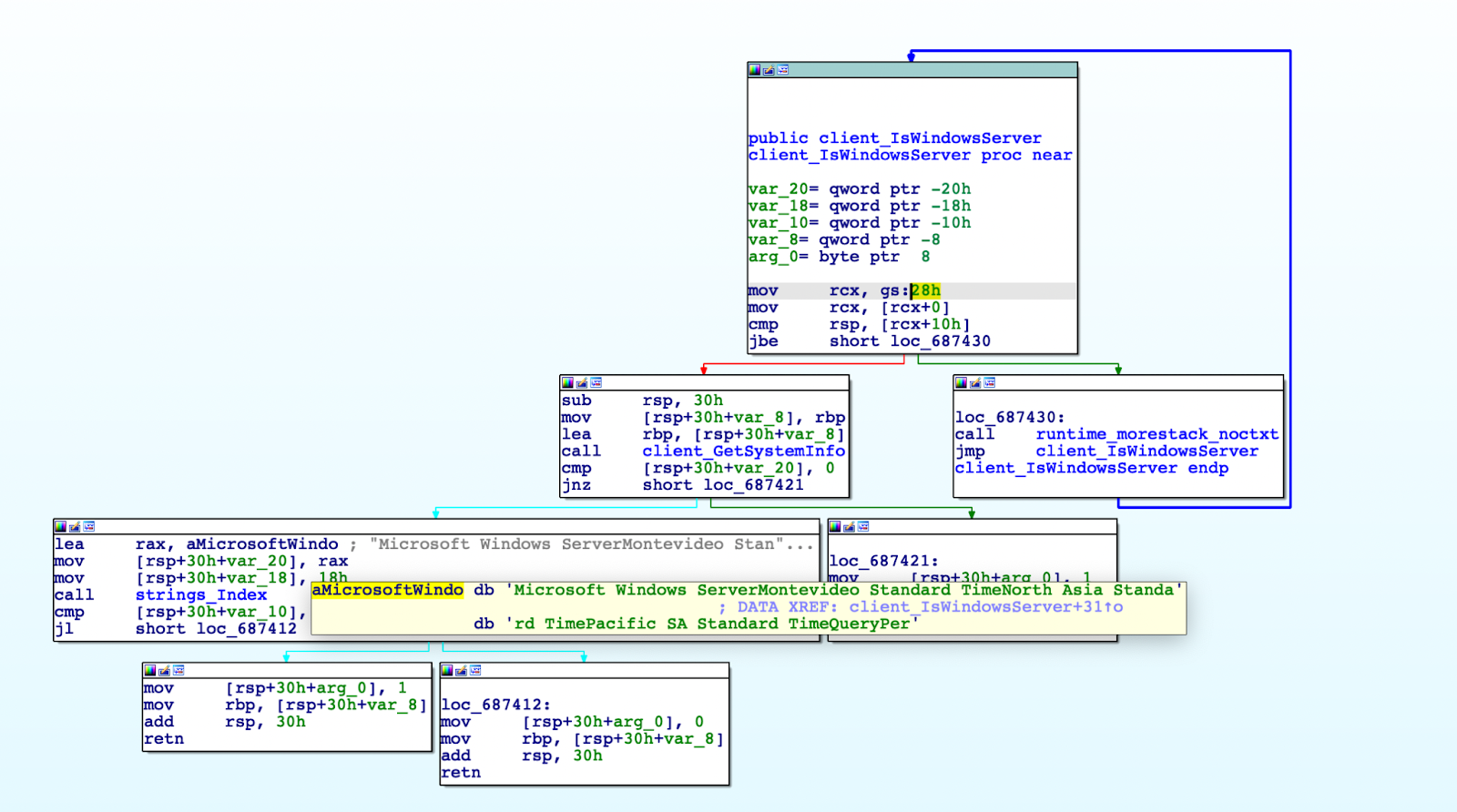 The malware has four options for privilege escalation, one of which is not implemented properly:

This exploit starts by opening the following registry key:

The default entry is set to the path of the malware, and an entry “DelegateExecute” has an empty string value added. Next, the program “computerdefaults.exe” is executed to complete the exploit.

The key is deleted after exploitation.

This exploit is similar to the Computer Defaults UAC bypass but this time it leverages the program “Features on Demand Helper” (Fodhelper.exe), a binary with the “autoelevate” setting set to true. The same registry entries are used. 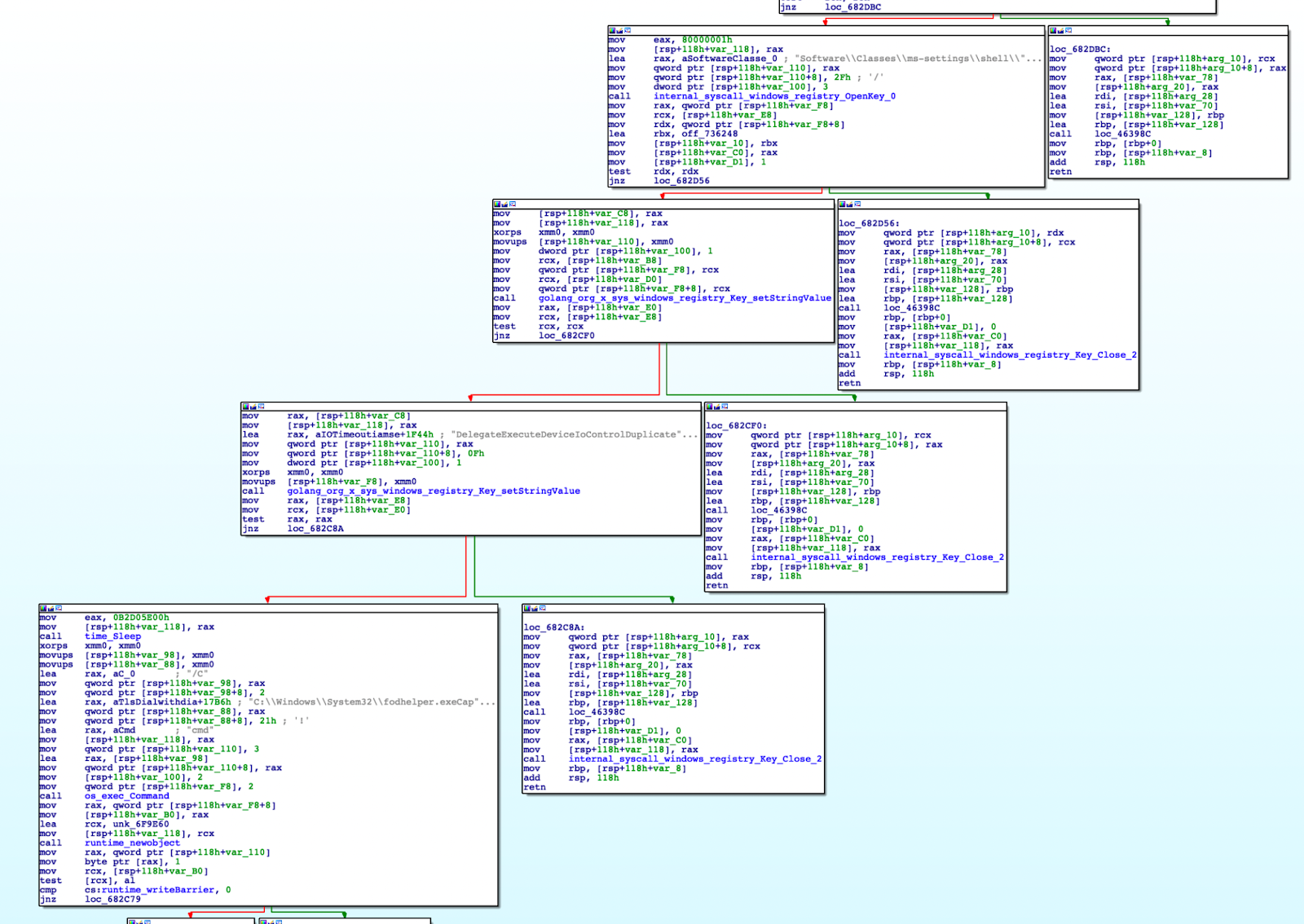 This UAC bypass works by leveraging the scheduled task named “SilentCleanup.” This task runs with the highest privileges but is configured to have the ability to be executed by unprivileged users. 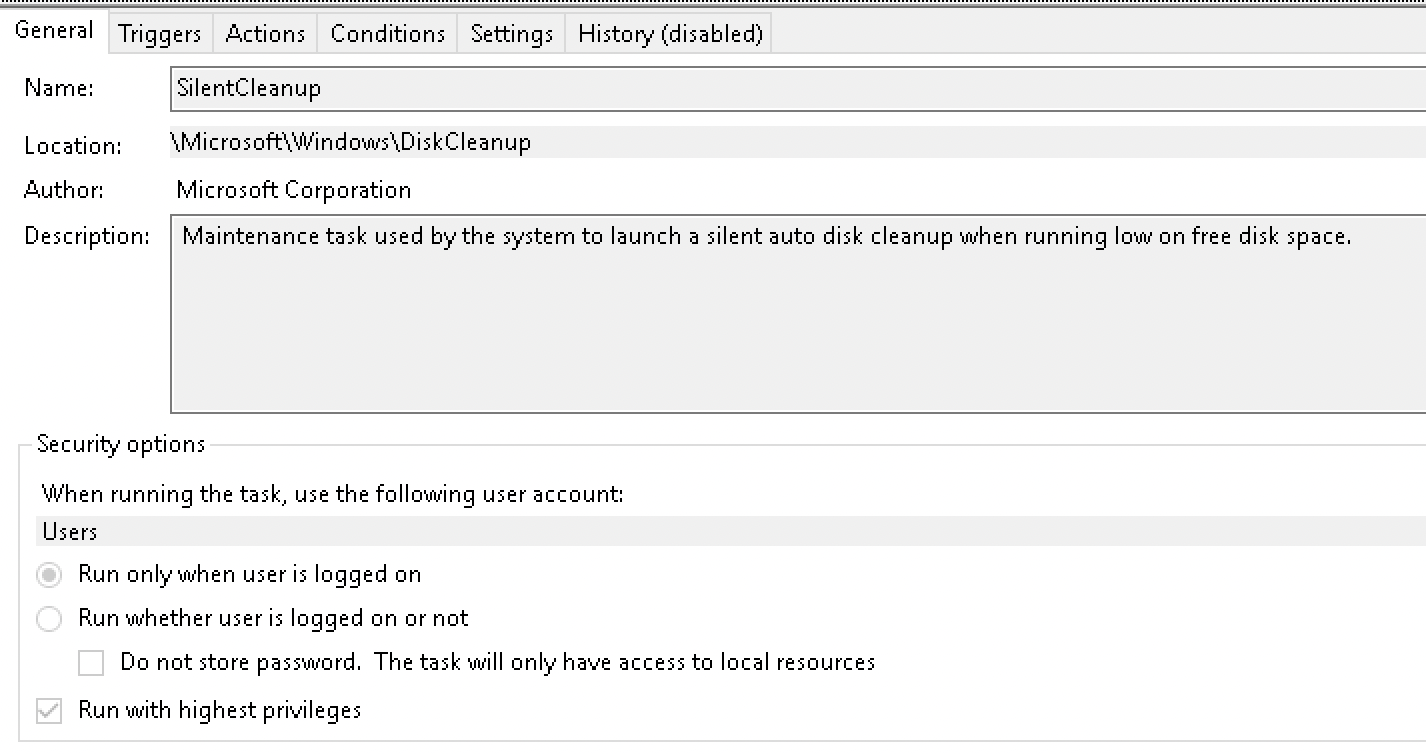 The malware attempts to leverage the environment variable “%windir%” to execute itself with higher privileges. The scheduled task runs an action “%windir%\system32\cleanmgr.exe,” therefore the malware tries to set the “windir” variable to the path of the malware.

After setting the registry, the malware runs the scheduled task.

Figure 15: Execution of the scheduled task

Based on the strings in this path, it appears that the malware intended to leverage the “Event Viewer” UAC bypass. But this does not appear to be properly implemented in the program. 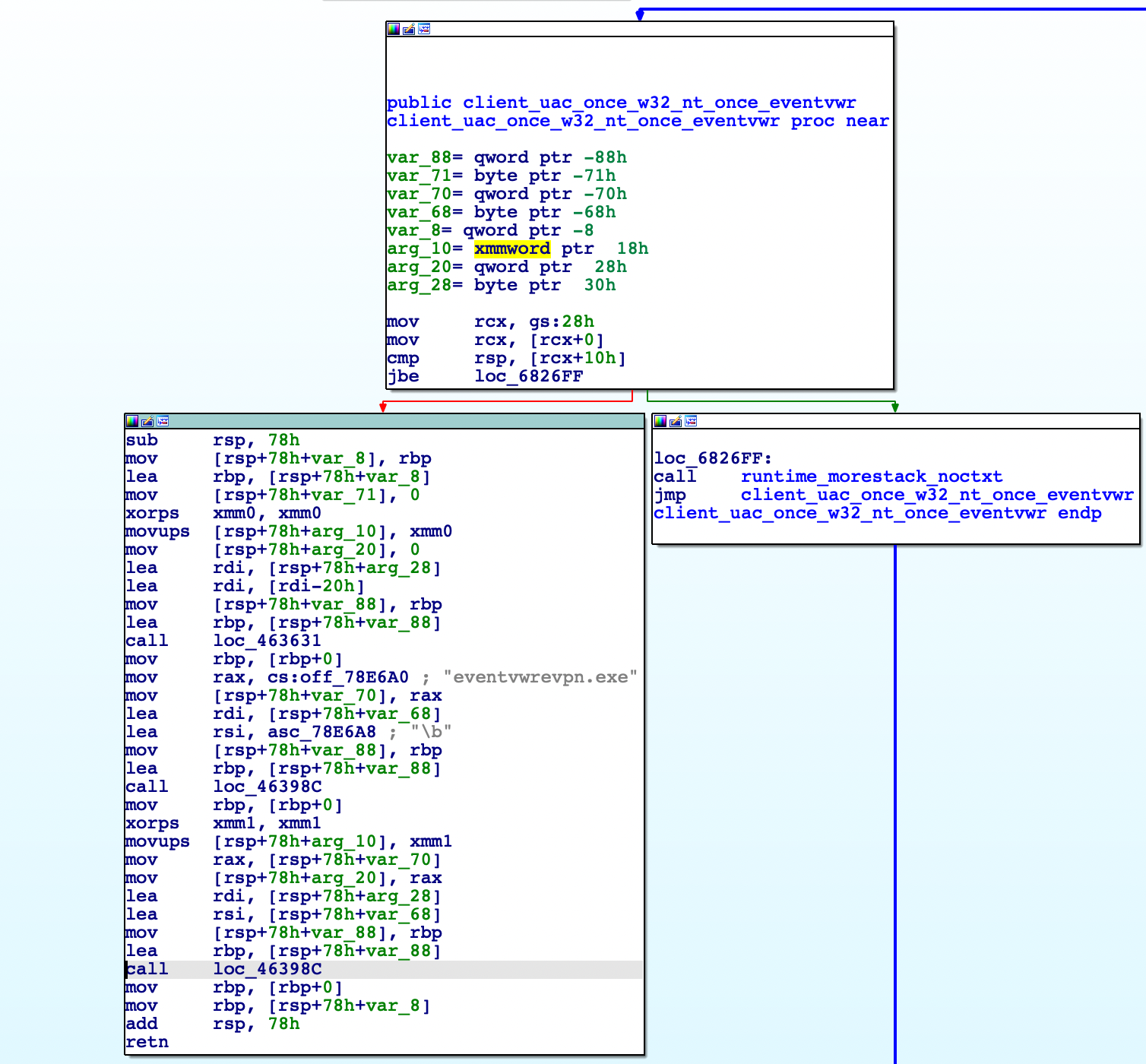 Figure 17: References to “eventvwr” in a function called by “MakeAdmin” parent

Before Command and Control (C2) is established the malware initiates a controller struct:

First, a x509 keypair is decoded from Base64 and loaded by the function tls.x509KeyPair. 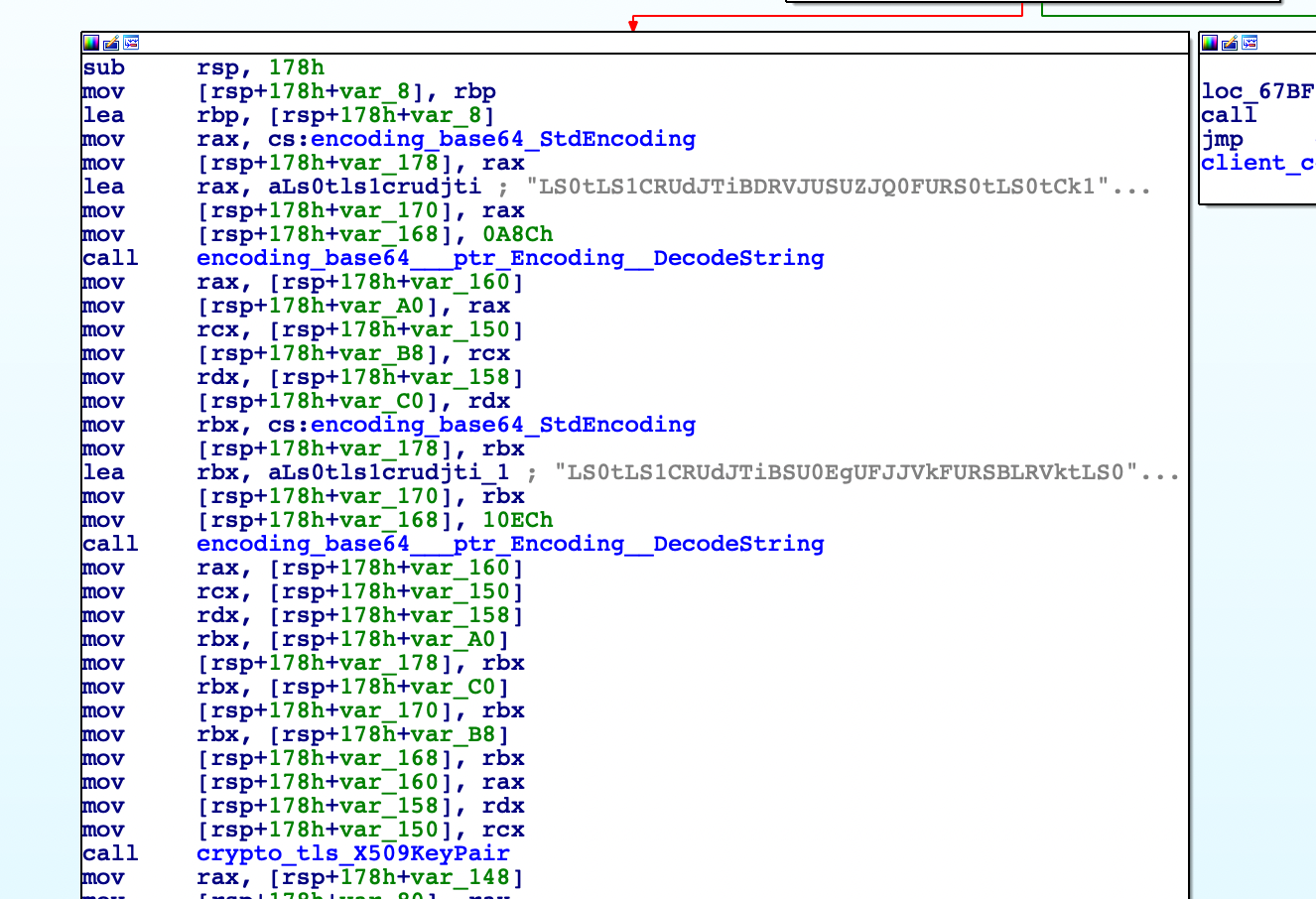 The decoded keypair is linked here and here. Strings from this certificate can be matched to strings in the Issuer DN of a similar certificate with subject “UrbanCulture, Inc.” A further PEM certificate is decoded and appended to the cert pool. A TLS handshake is performed with the C2 server 185.188.183[.]144 on the port 1141 and then creates a Goroutine called “Controller.WaitCommands.”

The malware is able to:

The malware will initiate further Goroutines to collect information from the system. If running as administrator, it will run the Lsass binary previously dropped into the temp folder.

Figure 19: Path of the Lsass binary to be executed

The results are stored in a file called “Andrew.dmp” inside the temp folder. This information is sent to the C2 server through a HTTP POST request.

Another routine will take a fingerprint of the machine, concatenating the results into a string, and send this off in a HTTP POST request. It runs the following commands in this order:

Finally, the malware will periodically get information about the local network and adapters.

Detect and Respond to Klingon RAT

Detect if your Windows machine or server has been compromised by Klingon RAT or any variant that reuses code using the Intezer Analyze Live Endpoint Scanner available via the enterprise edition. Running the scanner will classify all binary code residing in your machine’s memory.