PureLocker: New Ransomware-as-a-Service Being Used in Targeted Attacks Against Servers

We have found a new and undetected ransomware threat that is being used for targeted attacks against production servers of enterprises. Using code reuse analysis, we discovered this threat is closely related to the “more_eggs” backdoor malware, which is sold on the dark web by a veteran MaaS provider and has been used by the Cobalt Gang, FIN6, and other threat groups.

While the samples we analyzed are for the Windows platform, we have noticed that the group operating this ransomware is also employing a Linux variant in order to attack the Linux infrastructure of its targets.

We have named this ransomware PureLocker because it’s written in the PureBasic programming language. As part of our analysis, we have identified the evasion methods and design features that have allowed this ransomware to remain under the radar for several months. Below we present our findings through a technical analysis of the malware samples.

The Windows sample we analyzed is a 32-bit DLL, masquerading as a C++ cryptography library called Crypto++:

In viewing the exports section we quickly noticed that something was unusual, as the library supposedly contains functions related to music playback. 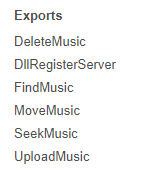 When looking at anti-virus vendor scan results in VirusTotal, we observed that the file has been essentially undetected for more than three weeks now, which is quite rare for a malicious file:

Additionally, when we executed this file in several sandbox environments it didn’t exhibit any malicious or suspicious behaviors.

However, after genetically analyzing the file in Intezer Analyze we made three key observations:

1. There is no Crypto++ code connection here, meaning the sample is not a Crypto++ library.
2. The file contains reused code from several malware families, mainly from Cobalt Gang binaries. This means the file is malicious and may have relations to Cobalt Gang.
3. The majority of the relevant code in this file is unique, indicating that it’s likely a new or highly modified malware.

A closer look reveals this file is a ransomware written in the PureBasic programming language, a rather uncommon programming language. This unusual choice poses advantages for the attacker. AV vendors have trouble generating reliable detection signatures for PureBasic binaries. In addition, PureBasic code is portable between Windows, Linux, and OS-X, making targeting different platforms easier.

The malware is designed to be executed as a COM server DLL by regsrv32.exe, which will invoke the DllRegisterServer export, where the malware’s code resides. All of the other, music related, exports have no functionality and are included in the ransomware for deception only.

The malware’s strings are encoded and stored as Unicode hex strings. Each string is decoded on demand by calling a string decoding function.

The malware’s code begins by checking if it was executed as intended by the attackers, and that it’s not being analyzed or debugged. If any of these checks fail, the malware will exit immediately, without deleting itself, likely as an anti-analysis method not to raise suspicion. The main function flow graph is presented below: 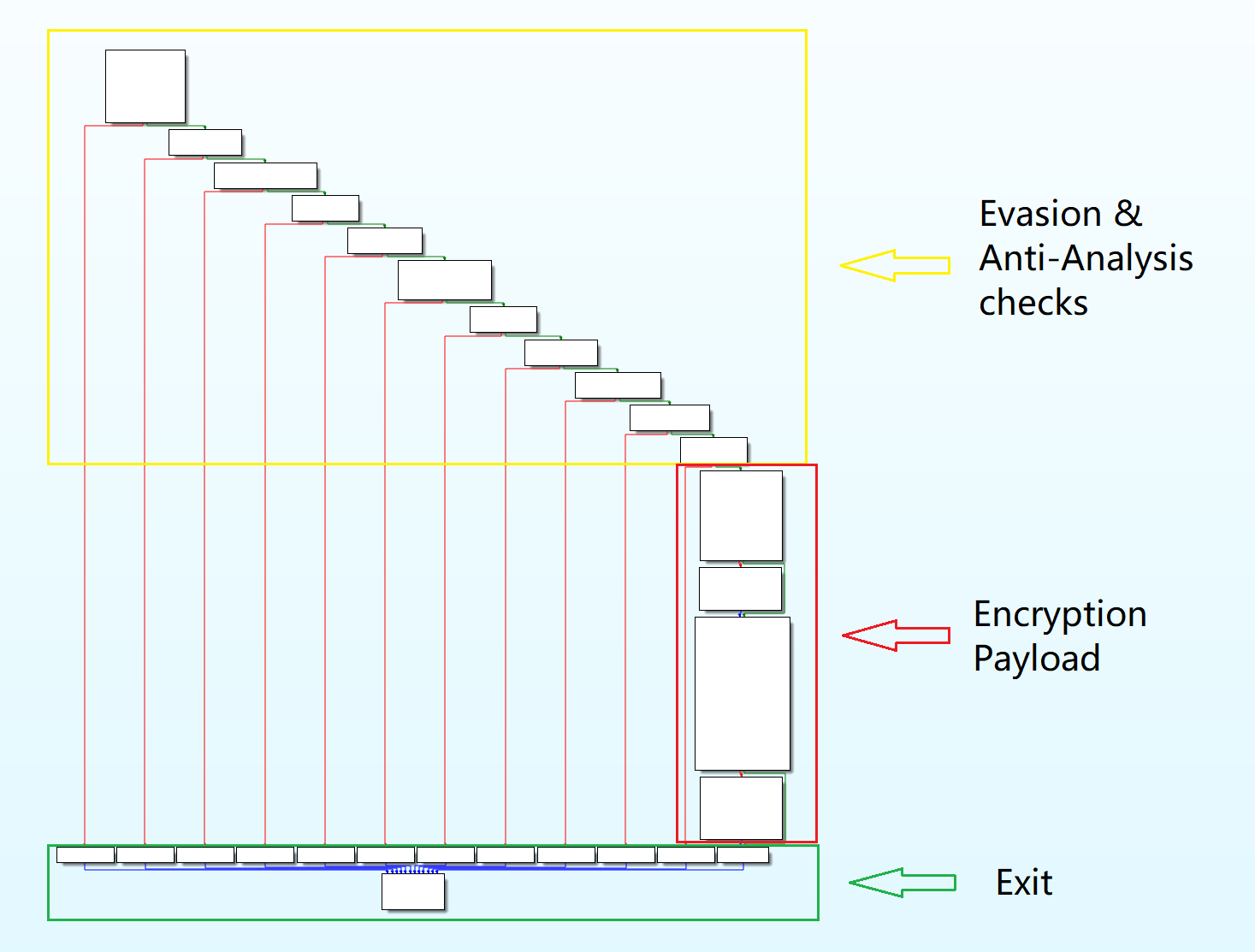 In case the malware’s payload is executed, the malware will delete itself immediately afterwards.

Part of a Targeted Attack Chain

There are several hints suggesting that this component is part of a targeted and multi-stage attack. The malware begins by checking whether it was executed with the “/s /i” arguments, which instructs regsrv32.exe to install the DLL component without raising any dialogues (silent):

Later on the malware verifies that it’s indeed executed by “regsrv32.exe”, and that its file extension is either “.dll” or “.ocx”. It also verifies that the current year on the machine is 2019, and that it has administrator rights. As mentioned, if any of these checks fail, the malware will exit without performing any malicious activity, likely in an attempt to conceal its functionality.

This type of behavior is not common in ransomware, which typically prefer to infect as many victims as possible in the hopes of gaining as much profit as possible. Additionally, being a DLL file designed to be executed in a very specific manner reveals this ransomware is a later-stage component of a multi-stage attack.

Uncharacteristically for a ransomware, the malware uses an anti-hooking technique by manually loading another copy of “ntdll.dll” and resolving API addresses manually from there. This is an attempt by the malware to evade user-mode hooking of ntdll functions. While it’s a known trick, it’s rarely used in ransomware.

The imports themselves are stored as 32bit hash values, and the ransomware uses the familiar resolve-by-hash method to obtain the function addresses. 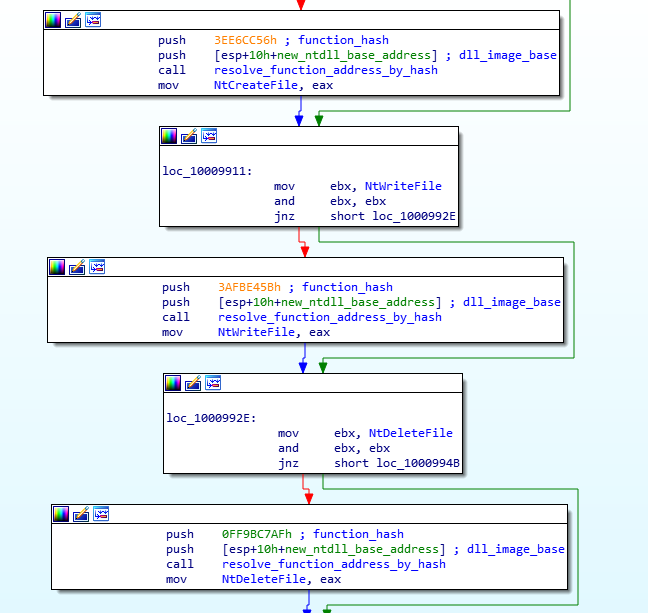 It’s also worth noting that the malware uses low level Windows API functions in ntdll.dll for most of its functionality—with some exceptions from kernel32.dll and advapi32.dll—notably for file manipulation. The malware also does not use the Windows Crypto API functions, instead relying on the compiled-in purebasic crypto library for its encryption needs, with the exception of utilizing SystemFunction036 from advapi32.dll (RtlGenRandom) for pseudo-random number generation.

In the event that all anti-analysis and integrity tests performed by the malware are satisfied, it proceeds to encrypt the files on the victim’s machine with the standard AES+RSA combination, using a hard-coded RSA key. The ransomware adds the “.CR1” extension for each encrypted file. It encrypts mostly data files, skipping encryption for executable files according to the particular file’s extension. The ransomware then secure-deletes the original files in order to prevent recovery. Once the malware has completed the encryption it leaves a ransom note file on the user’s desktop named YOUR_FILES.txt.

It’s worth noting that the ransom note does not ask for the payment type or for the monetary amount inside of the note itself, instead instructing the victim to contact the attacker via email. The attackers use the anonymous and encrypted Proton email service. Each sample we analyzed contained a different email address, which might be how the attackers can link between different victims and their respective decryption keys (each email corresponds to a specific RSA key pair). This is further evidence that this threat is different from typical forms of ransomware.

Another element to note is the “CR1” string, which appears in the attacker email addresses, the encrypted file extension, and ransom note. Since this is a RaaS, we believe this string is most likely the identifier of the group that is operating these specific samples.

A deeper examination of the genetic analysis results reveals that the code reuse connections to Cobalt Gang are related to a specific component used by the group in its attack chain, described here by Morphisec as the Stage 3 Dropper DLL. More specifically, this component is the loader part of the “more_eggs” JScript backdoor, also known as “SpicyOmelette”.

Most recently, IBM X-Force has uncovered several campaigns by FIN6 (also known as ITG08) where they observed heavy usage of the “more_eggs” malware kit.

A comparison between the PureLocker ransomware samples and recent more_eggs loader samples reveals it’s extremely likely that they were created by the same author. The lines of similarity are evident: 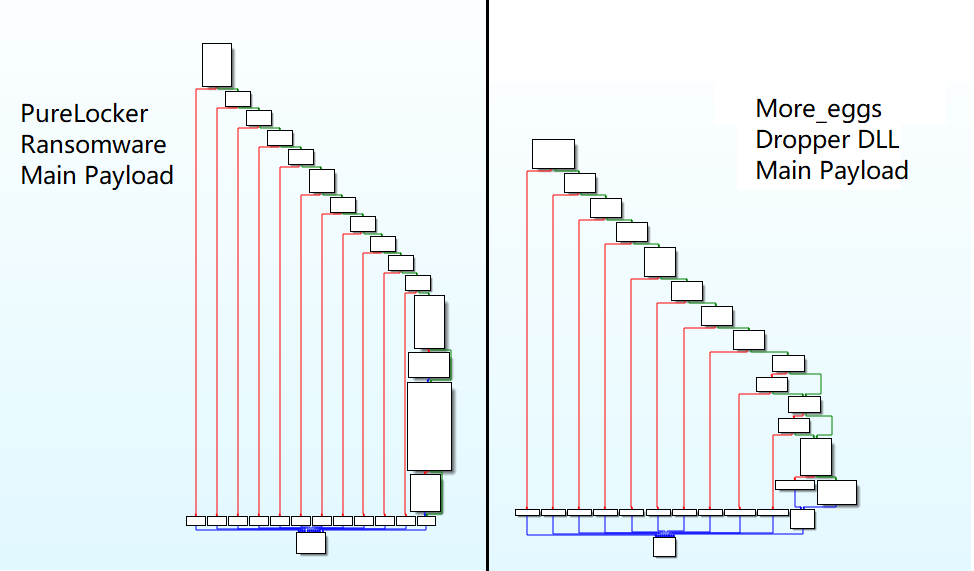 These findings strongly suggest that the MaaS provider of “more_eggs” has added a new malware kit to its offerings, by modifying the “more_eggs” loader’s payload from a JScript backdoor to a ransomware.

While we have a good sense regarding the malware’s origin, it’s unclear at this time whether the “CR1” group that’s using this ransomware for targeted attacks is a previous customer of the MaaS provider, such as Cobalt Gang and FIN6, or a new one.

PureLocker is a rather unorthodox ransomware. Instead of trying to infect as many victims as possible, it was designed to conceal its intentions and functionalities unless executed in the intended manner. This approach has worked well for the attackers who have managed to successfully use it for targeted attacks, while remaining undetected for several months.

It’s interesting to note that the code of the evasion and anti-analysis functionalities described in this blog is directly copied from the “more_eggs” backdoor loader. Some of these duplicated features have allowed the ransomware to stay undetected by evading automated analysis systems. This provides an example of the importance of code reuse analysis for malware detection and classification. It twists the usage of any previously used code, even code for effective evasion and anti-analysis, into a reliable indicator for detection.

The PureLocker ransomware is now indexed in Intezer’s code genome database and the genetic analysis of its samples can be viewed in Intezer Analyze.

Intezer would like to thank IBM’s X-Force IRIS team for its collaboration on this mutual research. For more information, check out IBM’s X-Force exchange collection related to this threat.

Michael is a security researcher turned product manager leading the Intezer Analyze product lifecycle. He has presented his malware research at conferences such as REcon and the Chaos Communications Congress (CCC).