We tagged 2019 as The Year of the Linux Threat. That trend continued in... Read more

The Ke3chang group, also known as APT15, is an alleged Chinese government-backed cluster of teams known to target various high-profile entities spanning multiple continents. Examples include attacks on European ministries, Indian embassies, and British military contractors. The group’s activities have been traced back to 2010 and it is known to boast a large number of custom tools, most often tailored to their specific target.

In mid May, we identified three recently uploaded samples from VirusTotal that share code with older APT15 implants. We named this new family of samples, “Ketrum”, due to the merger of features in the documented backdoor families “Ketrican” and “Okrum”.

We believe the operation was conducted very recently. Below we present a technical analysis of these samples and explain the evolution of APT15’s codebase over the last year.

The three samples we discovered seem to be a mix of the Ketrican and Okrum backdoors documented by researchers at ESET in 2019. Features have been merged from these two malware families to create a different RAT class for the group. We’ve decided to call this umbrella of malware “Ketrum.”

The new samples we found continue the Ke3chang group’s strategy of using a basic backdoor to gain control over the victim’s device, so that an operator can then connect to it and run commands manually to conduct further operations.

Before beginning our technical analysis, we were able to connect these binaries to Ke3chang using Intezer Analyze:

All three samples contacted the same C2 server and appear to have been used in two different time periods, judging by the PE timestamps and VirusTotal upload date:

The C2 was registered towards the end of 2019, which makes us believe the first PE timestamp was tampered with, and the latter two timestamps are at least close to the real compilation date.

It’s also important to note the C2 was registered in China and ceased operating in mid May.

THE BEST OF TWO WORLDS

We documented several interesting differences between the backdoors:

The Ketrum 1 sample was uploaded to VirusTotal in December 2019. This version registers itself as a “WMI Provider Host” service if it is able to obtain SeDebugPrivilege; otherwise it creates an entry in the startup directory.

This sample incorporates many features from Okrum as can be seen in the table above, however, it abandons more advanced Okrum features such as offering a reflective injection via an export and the use of hashes to receive command IDs.

In the past, APT15 has used the IWebBrowser2 COM interface to manage its network communications. This time, the Ketrum developer abandoned this technique and used simple HTTP APIs: 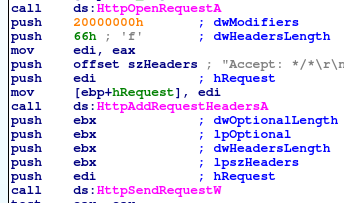 Ketrum 2 seems to have been built for minimalism. As can be seen in Table 2, many functionalities have been dropped.

Unlike the Ketrican variant, Ketrum implants no longer try to weaken the system’s security configurations. In previous implants, Powershell was used for this end. Interestingly, a string still remains in Ketrum 2, which refers to this deleted feature—perhaps an unintentional left-over from copy-pasting:

Several other interesting unused file names are included in the binary such as “%s\adult.sft” and “%s\Message”.

The malware first collects basic system information to track the infected endpoint and then sends it to the C2 server together with a hash of the system info:

These are actually constants used in the MD5 and SHA1 algorithms. The Ketrum developer most likely intended to confuse researchers reversing this function.

A command is then extracted from the HTML in the response: 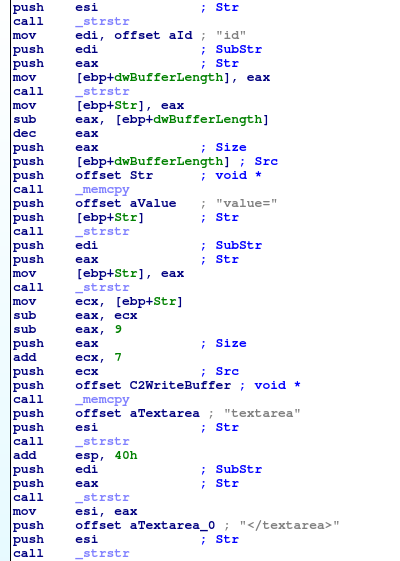 This backdoor only supports a limited number of commands, which is typical of Okrum and Ketrican backdoors. Unlike Ketrum 1, Ketrum 2 does not support screenshot grabbing. This is the list of possible backdoor commands:

Both Ketrum samples resemble a similar layout to previous Ke3chang tools, apart from low level implementation and use of system APIs. Even in the two Ketrum samples, there are differences between the low-level APIs used to achieve the same functionality. For example, the file upload feature is implemented using different APIs throughout the families; mostly using a constant value of 0x20000 when reading files:

As reported by FireEye and ESET, it’s likely the Ke3chang cluster of malware is developed by multiple teams and the developers of Ketrican/Okrum belong to a different team than the developers of Ketrum, albeit related. This could explain the high-level and flow similarities but also the low-level differences.

Ke3chang’s numerous tools such as Okrum, Ketrican, TidePool, Mirage, Ketrum, and others all serve the same purpose, give or take a few techniques or functionalities tailored for specific targets. We can regard these tools under the same umbrella of BS2005 malware, distributed as different versions per operation. However, the distinction created by naming them differently is useful for tracking the group’s operations and different development cycles.

The Ke3chang’s group tools have not deviated much from the same tools reported in FireEye’s first Ke3chang report. The group continues to morph its code and switch basic functionalities in their various backdoors. This strategy has been working for the group for years and there is no indication yet that it will deviate from this modus operandi.

The information security field has seen many improvements since the group’s inception, however, surprisingly, this is not reflected in the group’s persistence to use the same old TTPs in their tools.